Goonda Beersmiths: Out Of Mana DIPA

Is this what to grab if you’re “out of Mana”?

By Frank About Beer in Beer Reviews on March 19, 2018
No comments

One thing we’ve always tried to give here at Frank About Beer is frank and honest beer reviews. And to do that, sometimes we have to taste beer whose reputation precedes itself – and look past the hype to see if it really is worthy of the praise.

Sure, most diehard craft beer fans are familiar with the famous ones – Heady Topper, Pliney the Elder from Russian River and Dogfish Head’s 120 Minute come to mind easily – but there are other, smaller breweries around the country who are making a name for themselves on a local level.

Arguably the current talk of the town, through circles of craft beer fans in the Baltimore area, is Goonda Beersmiths.

Tim Scouten and Rahul Cherian started Goonda, literally, in the back corner of another brewery – Peabody Heights, where they work during the day contract brewing everyone else’s beer. The small setup where they brew their Goonda recipes has since gained them notoriety around town for producing some amazing, one-off beers.

So when a friend traded me three cans, I couldn’t wait to get them home. The first one I tried was this one, Out of Mana double IPA.

From my research, “Mana” is a Polynesian term that refers to a supernatural strength. If one is “Out of Mana”, you’re tired and weak, and it can sometimes be restored via drink. In Goonda’s case, it’s a tropical-tasting beer.

It pours out of the can as a hazy gold color with good carbonation. And with an alcohol content of 7.5% ABV, it skews toward the lower end of the DIPA range.

The aroma is AWESOME. As soon as you crack open the can, you’re hit with a delicious hop aroma that shoots a hoppy lightning bolt all the way through your nose to your brain’s frontal lobe. I imagine the reason is due to one of the main ingredients being Galaxy hops, which are likely added late in the brewing process due to their fruity flavor and aromatic nature.

The taste matches the same profile, with lots of tropical fruit flavors with strong pineapple right up front, along with some grapefruit and a little bit of an earthiness that I’d describe as “flowery”. 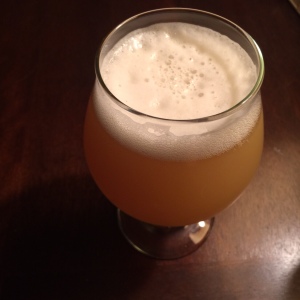 There’s a lot of complex flavor up front, but I found it faded quick, which ended up leaving a bit of a citrus peel bitterness behind. Don’t get me wrong – it’s still quite tasty and drinkable, but I think my preference would be for some more malt flavor to balance out that aftertaste.

So did it live up to the hype? There’s definitely a lot of good things going on with Out Of Mana, but I think a Mana 2.0 (if there ever is one) would be stellar. To be honest, the second of the three cans was a stout called POST that was really, really good (sorry I didn’t get pics or notes – long story).

But what of the third one – a double IPA called Knucklepuck? Friends, let’s save that one for Thursday.