A beer (and brewery) to get on your radar

“Any interest in a Scotch Ale?” came the question.

I looked up to see a cheery, bearded young man with a dark-colored beer. “Uh, sure!”

After all, I rarely turn down the offer of a beer, and when Jake from Smoketown Brewing Station handed me one, I wasn’t necessarily going to say no. After all, the previous four beers I’d had that day at their Anniversary Hootenanny had been outstanding.

If the name Smoketown Brewing Station doesn’t seem familiar which, given it’s location and previous availability, is fairly understandable, it’s definitely one that you should get to know.

Located in the small, historic town of Brunswick on the Maryland/Virginia border, and within sight of the Potomac River, Smoketown is a smaller brewery that is housed in the town’s old fire station. 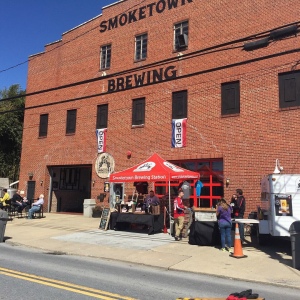 The building itself is worth the trip. It’s a massive brick structure that’s been kept fairly true to its original roots, but you’re also reminded by the tables in the former truck bay and the stack of bourbon and wine barrels in the corner that this is now a working brewery.

The memorabilia is cool, but it’s one of their more recent acquisitions that has really tied the place together nicely – Brewmaster Greg Nichols.

Greg joined the team late last year, and has set out to make some REALLY great beer by tweaking some recipes and adding new ones.

The black IPA is awesome. So is Walter’s Spirit, a bourbon-barrel-aged, vanilla-ey glass of amazingness named after a former (and maybe still current…) resident of the building.

But it was the Keelie Scotch Ale that grabbed my attention.

Scotch Ales aren’t normally on my radar. They tend to be very dark and malty and, typical of English-style ales, usually have a very dry finish. It’s not that I dislike them – I’m just much more likely to choose an IPA or stout if given the option.

This one arrived to me as a dark, opaque brown with mild carbonation. And despite Keelie being defined as, “a potential hooligan,” you should be able to keep yourself in-line while drinking this one given the mild 5% ABV alcohol content. 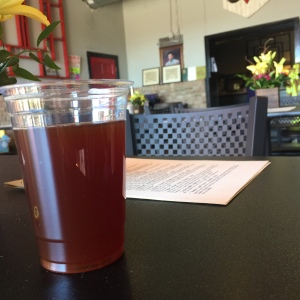 As I expected, the taste is sweet and malty, with lots of fruit flavors like raisins and black cherries, with a hint of a red wine vibe going on. It’s slightly bitter, and actually has a finish that’s mildly dry so it really appealed to my palate.

Admittedly, you won’t see Scotch Ales too often, but they’re worth a try especially if you like ESBs or brown ales (or even a Marzen or Oktoberfest). Occasionally, I’ve even detected a slight, off-putting metallic flavor from them (probably from the malt combination), so I recommend asking for a taste sample of a Scotch Ale before ordering a pint.

A quick search shows that Smoketown may not currently have Keelie on tap, but keep an eye out for it when it returns. It’s a great beer in their well-rounded portfolio.