A new brewery. A new stout. But does it live up to its name?

Opening a door and nearly hitting Hugh Sisson, founder and owner of Heavy Seas, isn’t a great way to start your evening at a new brewery. I mean, the man’s a legend in Maryland’s brewing community. His brewery makes batches of beer that are over 6,000 gallons at a shot. He’s been brewing beer longer than I’ve been legally allowed to drink it. Heck – he’s been brewing beer since before many of his patrons were born.

And yet here we are, staring at each other face-to-face. He smiles and waves, and I’m relieved to discover that he didn’t notice how close I came to bumping him with the door. But what’s he doing here, anyway? It turns out, he’s not the only Baltimore beer celebrity in the room.

It’s a late Friday afternoon in June, and we’re all standing in the new taproom at Checkerspot Brewing, Baltimore’s newest brewery, located just on the edge of the Federal Hill neighborhood. It’s hot outside, and the late afternoon sun comes streaming in through the large, picture window illuminating several pints of beer in rich golds, oranges and browns. I squint through the sun, and start to make out some familiar faces, many of whom are smiling and waving me over.

There’s Greg, brewer and owner of Waverly Brewing. And Yasmine, owner of nearby Suspended Brewing. Tim and Rahul from Goonda Beersmiths raise their beers in my direction. The brewer from DuClaw Brewing clinks his glass at me on his way past. The guys from Key Brewing are there. Most of the staff from Milkhouse Brewing at Stillpoint Farm made the hour-long trip to be there. I even ran into our friend, Chris Sands, host of The UnCapped Podcast, who came all the way from Frederick.

Checkerspot has been a long time coming, and owners Steve Marsh, Judy and Rob Neff have been working hard to make it a reality. They’re three wonderful, genuinely nice people – and it turns out their beer follows suit.

I had an assortment of six beers on tap that night. There were a couple really nice IPAs, a Belgian tripel, and a cask-conditioned ESB made with tea that was oddly delicious. But it was their Keeper Stout that really grabbed our attention.

“Taste this,” I commanded of several brewer friends, each one of us sipping from the pint glass, then staring at each other with widened eyes.

Keeper stout is a milk stout, which means that it’s not only made with darkly roasted barley, but it also contains lactose (also called milk sugar) that feeds the yeast and gives an inherent, mild sweetness to the beer.

As if that wasn’t enough, Keeper has also been infused with nitrogen, so the creaminess is intensified almost exponentially.

It pours into a glass as a black, opaque beer with good carbonation. The nitrogen gives the beer smaller, fine bubbles which cascade their way down into the beer, slowly rising to the thick head on top of the beer. It’s fairly mild in alcohol content, and measures a nice, low 4.7% ABV. 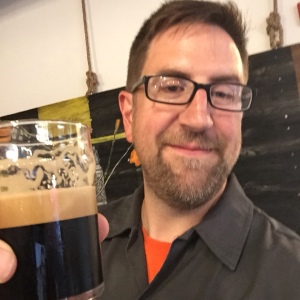 The aroma is definitely loaded with chocolate, and what I think might be some oatmeal added to the grains. The taste, however, is where the magic happens.

I got a strong oatmeal flavor, which could be coming from the roasted malts. You’ll also taste some chocolate, and a mild sweetness. It’s actually not bitter at all, which makes for a smooth sipping beer. I was told this beer is also brewed with Chesapeake Bay blue crab shells to impart, “a roundness and minerality.” To be honest, I didn’t pick up much minerality, but if the secret ingredient to great beer like this is blue crab shells, then I’ll be the first to insist they be added to everything.

Without hesitation, I’m confident this is the best stout I’ve had in a year, hands-down (alright, maybe top 3). And, since I love stouts, you know that means it’s beating out some pretty good competition.

Keeper stout could have easily been one of those overly sweet, dessert-like beers, but Checkerspot did a great job of scaling back the flavors so that they’re quite pronounced, but aren’t competing for your tastebuds. If you love stouts, this is one for beerginners and beer geeks alike. If you’ve never tried a stout, this one could be the one that opens up a whole new world for you.

With any luck, it’ll stay on their list for a while. This one’s definitely a keeper. 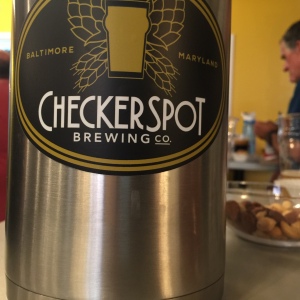 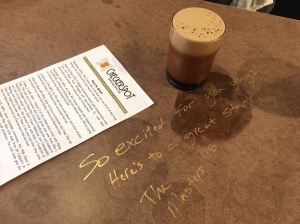 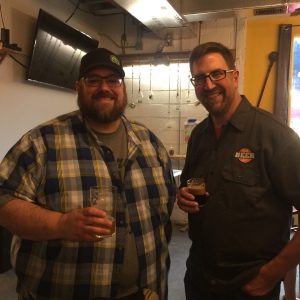